"Every student touches OCW. And it's not only good for students at MIT, but for people everywhere. OCW is MIT's stamp on the world." 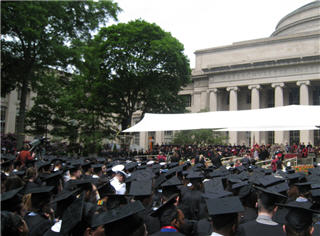 In the spirit of giving back at MIT, each class is tasked to choose how they can help improve MIT for current and future generations.

The MIT Class of 2009, however, considered projects that benefitted not only MIT students but also those outside of the Institute. With its global reach as well as its impact on the MIT experience, OCW was the ideal fit for their class project.

In choosing OCW, the MIT Class of 2009 supports a resource that nearly every student at MIT uses. Whether to compliment current studies, brush up on skills from previous semesters, or map out academic careers, MIT students turn to OCW as an important academic aid.

The MIT Class of 2009 gift also has global impact, as OCW reaches far beyond the MIT campus, supporting millions of educators and learners around the world.

Class Coordinator Brandon Reese ('09) explained it best when he said, "Every student touches OCW. And it's not only good for students at MIT, but for people everywhere. OCW is MIT's stamp on the world."

The Class of 2009 chose to support 5.111 Principles of Chemical Science, one of the most popular courses on OCW and a general Institute requirement. Through new videos and course materials generated with their gift, the Class of 2009 is providing open educational resources that will further the study of chemistry at MIT and throughout the world for years to come.