“OpenCourseWare is exactly the kind of thing that universities should be doing.” 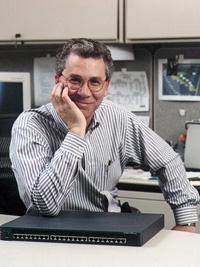 Larry Birenbaum, a 1969 MIT graduate in Electrical Engineering, has an impressive history of giving back to his alma mater. In the past, his gifts – like those of many donors to Institute – have supported departments that transformed his own MIT experience.

For example, Birenbaum, who is the former Senior Vice President and Group General Manager of the Ethernet Access Group at Cisco Systems, was a founding member of the 3Com Corporation, and one of the donors of the 3Com Chair in MIT's Laboratory of Computer Science in 1999. Birenbaum and his wife, Jan, also established an MIT scholarship fund which supports MIT undergraduates who were born as citizens of another country and immigrated to the United States, and became U.S. citizens.

Birenbaum, who is himself a naturalized citizen, feels it is important to make an MIT education accessible to gifted students – just as, decades ago, a scholarship helped make MIT accessible and affordable for him.

A radical approach to using the Internet

Recently, however, Birenbaum and his wife Jan gave a generous gift in support of an MIT initiative that did not exist when Birenbaum was a student: MIT's OpenCourseWare.

"It's true that gifts typically support something that you experienced as a student," Birenbaum says. "But I was really taken by this initiative. A lot of other schools are trying to figure out how to make money off the Internet, and that's completely understandable. But I just love the idea that MIT took a completely radical approach, and said, 'We're going to make these materials free to everybody.'

"I had the opportunity to take some terrific courses when I was at MIT," Birenbaum adds. "I took Hans Lucas Teuber's Introduction to Psychology, which was fabulous, and eye-opening.

"In the Electrical Engineering department, I took a hands-on laboratory course in which I worked on building a computer from scratch, trying to demonstrate that file sharing could be accomplished on a hardware basis. We didn't quite complete it... I guess we'll never know if it was a reasonable idea! But it was an incredible learning experience."

With his gift to MIT OpenCourseWare, Birenbaum hopes to make this type of learning experience accessible to others around the globe.

"OpenCourseWare is exactly the kind of thing that universities should be doing," he says, "in terms of being novel and forward-thinking. The courseware is definitive, which you'd expect from an institution like MIT. It's also comprehensive - a rigorous, disciplined, methodical approach to committing this stuff online. And that's so generous… and so useful."

Birenbaum has been so impressed with the initiative that it has actually transformed his own relationship with the larger institution.

"This initiative actually reeled me back into the school," he admits. "I had kind of drifted away, in terms of involvement. But [the OCW] announcement really brought me back."

A tribute to generosity

Birenbaum's gift is a tribute to the generosity and work of the faculty, who make OCW possible. "I've been really impressed with the unselfish attitude that the faculty has taken with this," Birenbaum says.

"I don't know much about university politics, but I would gather that the stuff that they pull together for their courses is, in a sense, proprietary. Why should they make that available to others? But they seem to have overcome all that, and fulfilled the commitment to get 100 percent of their courses on the Web. That's just extraordinary."