Topics in Mathematics of Data Science 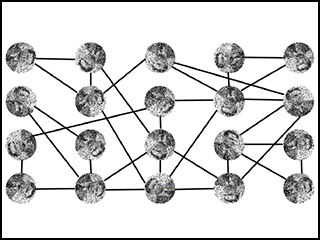 Given noisy rotated copies of an image (corresponding to vertices of the depicted graph), the goal is to estimate the original image (or answer: Who is in this picture?). Before averaging the images to denoise them, one has to estimate the unknown rotations they were subject to. By comparing some pairs of images (corresponding to edges of the depicted graph), it is possible to estimate the relative rotations between them. The problem of recovering the rotation of each image from these relative rotation estimates is an instance of Angular Synchronization. (Image by Dr. Afonso Bandeira.)

This is a mostly self-contained research-oriented course designed for undergraduate students (but also extremely welcoming to graduate students) with an interest in doing research in theoretical aspects of algorithms that aim to extract information from data. These often lie in overlaps of two or more of the following: Mathematics, Applied Mathematics, Computer Science, Electrical Engineering, Statistics, and / or Operations Research.

For more information about using these materials and the Creative Commons license, see our Terms of Use.