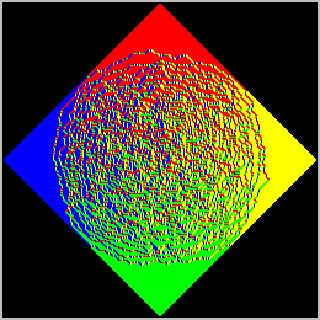 A random tiling of a stop sign shape, going from an Aztec diamond to a square. It was made by starting with all horizontal dominoes, and then performing ten billion moves in which a random pair of dominoes is rotated, replacing two horizontals with two verticals or vice versa. Horizontal dominoes are red or green, depending on parity, and vertical ones are blue or yellow. (Image courtesy of Cris Moore. Used with permission.)

For more information about using these materials and the Creative Commons license, see our Terms of Use.